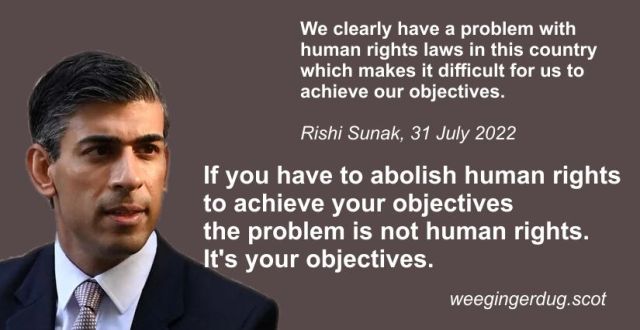 In an interview over the weekend, Rish! Sunak and his exclamation mark of ambition, tried to make up the ground in the “I’m a total Tory bastard stakes” that he was losing to Liz Truss, whose campaign is assisted by the fact that the only ideology she’s ever had is whatever is going to aid her advancement at any given moment. Bereft as she is of any notable talent or skills other than annexing the credit for other people’s work, Truss has ascended to her current position due to her willingness to do the bidding of whoever holds power, and not speaking out even when that power is wielded by someone as manifestly unfit for the office of Prime Minister as Boris Johnson, a corrupt serial liar who has open contempt for democracy. Truss is what happens when you put into high office one of those British nationalist social media trolls whose response to every outrage against democracy, common decency, the rule of law, or basic honesty of this Conservative Government is a snarky comment about the Arran ferry or Patrick Grady as though that negates the destruction of the few and fragile democratic safeguards afforded by what passes for the British constitution. It’s the politics of nyah nyah nyah.

At the Tory party hustings on Monday, Truss, with her personal mandate of less than 0.2% of the Scottish electorate said that she will not “allow” another independence referendum and branded the Scottish First Minister as an “attention seeker, ” adding, “The best thing to do with Nicola Sturgeon is ignore her.” That’s what the Tories have been doing to Scotland for years, hiding their heads in the sand and hoping their nightmare of Scottish independence will just go away. Just for Truss’s information, the number of days since the SNP last won an election in Scotland is 88, the number of days since the Conservatives last won an election in Scotland is 24,588. But yeah just ignore them Liz, how’s that working out for you?

Truss’s remark sums up why Scotland needs independence. Nicola Sturgeon is Scotland’s First Minister, she has a clear mandate for another independence referendum from the people of Scotland, but Truss thinks the best thing is to ignore all that. That same day Truss’s supporters amongst the Scottish Tories at Holyrood boasted that with Truss as PM, Scotland would be “at the centre of the UK”. Timing is everything in comedy.

This would be the same attention seeking Liz Truss who hired a photographer at taxpayers’ expense in order to build her own brand on a world tour. Truss charged the taxpayer £1,483 to hire a professional photographer for her tour of Australia, New Zealand, and Japan. The public purse also coughed up a further £1,190 for Truss’s “PR-related activities” on the trip. This produced a pic of Truss sitting with a union flag umbrella on a British made bicycle in the pouring rain in front of the Sydney Opera House. Truss also loves to pose for photos when she’s on the phone as though she’s on a terribly important call with a global leader. On Monday she posed in an England football strip with a football and an England flag. Truss’s entire career is an exercise in attention seeking.

Right now the most important ideology aiding the principle free void who is the Foreign Secretary is the one that says she’s not Rishi Sunak. Despite the fact that he was always a supporter of a hard Brexit, it’s Truss who has now become the darling of the batshit crazy Brextremist Anglo-British nationalist wing of the Conservative party, which these days is to say most of it. Truss is reportedly far ahead amongst Conservative party members, who blame Sunak for defenestrating Johnson, a view which Johnson himself is keen to foster. There is no greater victim on this planet than an entitled upper middle class English Conservative who has suffered the loss of his immense privilege. The way in which Johnson protects his grudges is inversely proportional to his lack of care for the truth. Johnson and his supporters are determined that Sunak will be punished for his lack of loyalty, which they have now decided is the most heinous crime possible, although they seemed to have a different view when it was them who were plotting to unseat Theresa May.

Truss is the favoured candidate of Johnson and the European Research Group and the rest of the extreme right of the Conservative party, in no small measure because they believe that Truss will be their puppet. The clear advantage enjoyed by Truss amongst Conservative party members has led one senior Tory after another to publicly back her campaign. Over the weekend she got the support of early favourites Ben Wallace and Tom Tugendhat, and on Monday evening Penny Mordaunt, one of the final three candidates, announced that she too was giving her backing to Liz Truss. A straw poll of Conservative party members in Devon on Monday on Channel 4 news failed to find a single person who preferred Rishi Sunak. Ballot papers started being delivered to party members this week, and habitually they are returned promptly so barring some unforeseen circumstance, it looks as though Truss will become Britain’s next worst Prime Minister ever.

Truss has never displayed any independence of thought or backbone throughout her political career, it would be surprising if she started now. Truss is also hampered by her lack of charisma and showmanship, qualities which a Prime Minister needs in order to be able to sell unpopular policies. Dominic Cummings believes that the real reason Johnson supports the woman Cummings calls the hand grenade for her propensity to leave a trail of destruction in her wake is because he thinks that Truss will be hopelessly out of her depth as Prime Minister, and will be unable to deal with a cost of living crisis which is only expected to worsen next year. Johnson is calculating that Truss will be so inept that the slide in Conservative party fortunes in the polls will become a rout, leading to panicking MPs deciding to get rid of Truss and giving Johnson the opportunity to make a triumphant return. This may or may not be true, but Johnson is certainly cynical enough to think along these lines.

Meanwhile for his part Sunak is trying to prove to Conservative party members that he too can be intolerantly right wing, although given that he was a leading figure in Johnson’s government for two and a half years, we already knew that. In an interview over the weekend Sunak said : “We clearly have a problem with human rights laws in this country which makes it difficult for us to achieve our objectives.” Sunak was talking about how the breaches of human rights caused by the government’s inhumane policy of sending refugees and asylum seekers on a one way trip to Rwanda had been blocked by the courts. The Conservative response to this is not to recognise that a cruel and despicable policy which breaches human rights is a policy that has to be abolished, or at the very least substantially changed, it is to seek to abolish the human rights laws that stand in their way.

My Gaelic maps of Scotland are still available, a perfect gift for any Gaelic learner or just for anyone who likes maps. The maps cost £15 each plus £7 P&P within the UK. You can order by sending a PayPal payment of £22 to weegingerbook@yahoo.com (Please remember to include the postal address where you want the map sent to).

I am now writing the daily newsletter for The National, published every day from Monday to Friday in the late afternoon.  So if you’d like a daily dose of dug you can subscribe to The National, Scotland’s only pro-independence newspaper, here: Subscriptions from The National

This is your reminder that the purpose of this blog is to promote Scottish independence. If the comment you want to make will not assist with that goal then don’t post it. If you want to mouth off about how much you dislike the SNP leadership there are other forums where you can do that. You’re not welcome to do it here.

You can help to support this blog with a PayPal donation. Please log into Paypal.com and send a payment to the email address weegingerbook@yahoo.com. Or alternatively click the donate button below. If you don’t have a PayPal account, just select “donate with card” after clicking the button.