The village of Kingston was once the centre of a thriving shipbuilding industry which sent its products all over the world. It owes its name to one of the original shipbuilders, William Osbourne of Kingston-upon-Hull. He and his partner, Ralph Dodsworth of York, purchased the forest of Glenmore from the Duke of Gordon in 1784. Timber was floated down the Spey to Garmouth where it was shipped south. About 1785 or 1786 Dodsworth and Osbourne opened their shipyard, constructing about 25 vessels from 25 ton sloops to 500 ton ships in the first decade and a further 30 before closure in 1815. One of these, the brig Glenmore (110 tons), was a man-o’-war but little is known of the others. Other builders probably worked here at the same time.

On closure of the Dodsworth & Osbourne yard many shipwrights emigrated to Miramichi, New Brunswick. One who remained was William Geddie. He purchased a wreck at Lossiemouth, refloated and repaired it, and used the profit to establish a new yard which survived until the 1880’s. After its closure the Geddies emigrated to Natal.

One James Geddie returned to Kingston in 1932 and discovered a chest containing over 30 drawings of ships built by his forebears. These were given to the Science Museum. They were unusual in that most ships were then built by “rule of thumb” and no drawings ever existed. At the peak of activity in the 1850’s to 1870’s, Kingston had seven shipyards as shown on the map. 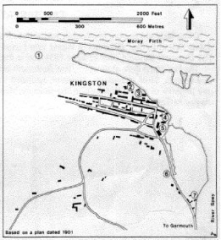 The most important were the Geddies at site 4 (last ship 1884), John and James Duncan, site 5 (last known ship 1876) and William Kinloch, site 2 (last ship 1888). Some of the last ships of all were built by James Geddie, site 7, and William Anderson, site 6. Others included Alexander Spence, Young Brothers, Young and Badenoch and Leslie.

In 1861 the population of Urquhart parish (including Kingston) was 2352 but by 1901 this had dropped to 1717. In 1862 the village had 25 ship owners, shipbuilders and ship masters, 57 carpenters and joiners, four smithies and numerous painters, sailmakers and riggers. In all over 300 ships were built.

Working conditions at the yards seem to have been relatively free and easy and the wages reasonably adequate – about £1 a week for a journeyman carpenter in the 1860’s. Kingston had a town drummer employed to raise the carpenters from their slumbers, especially necessary after the celebrations of a launch.

The most unusual of these were at Anderson’s yard (site 6) where the only public road had to be closed for 36 hours to enable the launching ways to be prepared. Christening bottles were decorated by Mrs Geddie with red, white and blue ribbons and a posy of flowers. Afterwards the builder’s house was open to all and a grand dinner was held at one of the inns, followed by a dance. An apprentice’s first launch ended in a ‘dooking’ for him.

Some of the Spey-built ships had interesting histories. They ranged in size from small smacks to the 800 ton Lord Macduff and the largest 3-masted schooner of its day, Clansman, both built by Kinloch. The latter could carry 620 tons of cargo and cleared £3000 profit in her first year. Other ships were less fortunate, such as the 300 ton brigantine Duke of Richmond, built by Duncan in 1868, which on one voyage lost her mizzenmast, replaced at Mauritius at a cost of £600, then had further extensive repairs at Cape Town at a cost of £3333. Like many others she was finally wrecked off Australia in 1884.

One of the most famous of all was the 800 ton barque Chieftain, built by James Geddie, which raced the tea clippers from Shanghai in 1858 and beat many of them, completing the voyage to London in less than 100 days.

Others set records on more modest voyages, such as the 500 ton barquentine Wanderer which sailed from Savanilla (near Cartagena, Columbia) to Hamburg in 30 days. The most popular size and design was the 99 ton schooner, for example the Dispatch shown here. Another of these, the Konigsberg, built by Kinloch in 1877, sailed from Inverness at the beginning of March, took on coal for Konigsberg (now Kaliningrad) at the Forth, returned with barley to Islay, went in ballast to Troon, took on coal for St Petersburg (Leningrad), returned to Kirkcaldy with oilcake, loaded with coal for St Petersburg again, came back to Maryport, Cumbria, sailed to Westonpoint, near Runcorn, then to St Petersburg again with salt, finally returning to Aberdeen with crushed bone in November. Like many other Spey-built ships she was owned by a Portgordon man.

Other local ships were involved in war action, from the brig Glenmore and the Crimean War transport barque Billow Queen to the “Q” ships of World War I used to lure U-boats, such as the Dispatch and the similar Ythan. The Dispatch survived until at least 1931 and is the subject of a National Maritime Museum postcard. 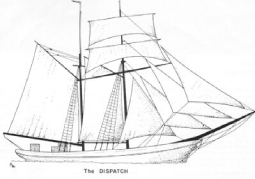 The last boats built at Kingston and Garmouth were steam drifters, up to the beginning of the First World War (see below). Steel and steam, however, sounded the death knell for this local industry and all that remains are rare pictures of ships, drawings in the Science Museum, a few contemporary newspaper accounts and a small display in Tugnet Ice House. 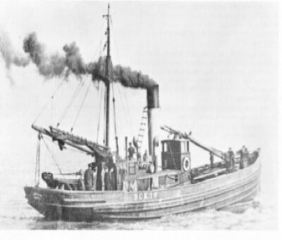 …far more Geddies – along with Kingston/Garmouth Duncans, Andersons and at least one Milne and one Innes, headed to the Eastern Cape of South Africa, mostly to a place called East London, where James Geddie (1840 – 1911) had been invited by the Kaffrarian Steam Landing Company.

The letter inviting him is on display in East London museum, South Africa. The basic address is as it was sent from South Africa to Scotland.

The Company requires a Head Carpenter who could, besides attending to the carpenter work of the Company generally, draw working plans, i.e. for lighters and build the Lighters. They also require good hands all of whom must be steady men and good workmen. The company would be prepared to give the Head Carpenter £15 per month and the others £12   ”       ”  the Company paying the passages out under the Immigration Act.

Your brother stated that perhaps you might be inclined to come out for a time, if so I should be glad to hear from you in any case please advise me by return mail so that I can make arrangements. Any information you require regarding the Coy could be obtained from Messrs. I. Searight & Coy., 7 East India Avenue, London

6 thoughts on “Shipbuilding on the Spey”