Menopause is here, it’s real and it will affect almost every woman you know, if not now, then in the future. …

Neil Cooper on the Tories crass attempts to resurrect their reputation on Merseyside and associate a new Beatles experience with “levelling up.” I Read the News Today. Oh, Boy! When The Clash released London Calling at the end of 1979, the politically charged title track of the first generation punk band’s third album sounded like […] Source

DESPITE a year and a half of Covid-induced uncertainty, Moray Reach Out (MRO) are looking forwards with optimism as restrictions are eased. …

A READER of The National has told how they were “gobsmacked” to see clothing branded with the slogan “Stronger Together” on a trip to their local Primark store. Source

It’s been raining for days. Chucking it down. The downpour is biblical. The rail line between Dumfries and Carlisle has been shut for safety checks on a viaduct. Two bridges have collapsed. The River Annan is flooding. The BBC reporter tells us this news but doesn’t mention climate change. Everything is disconnected. My timeline and […] Source

CLIMATE activists have disrupted a major speech by the COP26 president to brand the UK Government “hypocrites”. Source

A THIRD of Scotland’s largest brassica crop has been left to rot in the field because Brexit ended access for seasonal pickers. Source

A WARNING has been given that the gap between UK and EU standards is likely to grow, leading to even more difficulties for trade, with possible bans on some UK exports. Source

The first in a series of Bella Classics – reviewing and reflecting on classic Scottish texts. Here we look at Malcolm Slesser,The Politics of Environment: A Guide to Scottish Thought and Action – Books from Scotland, 1972. The fractious debate over the merits of exploiting the Cambo oilfield to the west of Shetland is a […] Source

OVER 1500 hard to reach homes and businesses in Moray and Aberdeenshire will be given access to next generation broadband through Project Gigabit. … 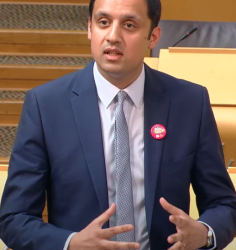 Former Labour leader Jeremy Corbyn has added his name to those within the party who believe it should rethink its opposition to a second referendum on Scottish independence. Labour’s current leader Keir Starmer and Scottish leader Anas Sarwar are both opposed to indyref2, continuing the anti-independence stance the party took…

HOPING to hop off to his forever home is Pet of the Week Bing. …