The water tower was built in 1898-9 to distribute water to the people of Garmouth, Kingston and District, and is a Category C listed building

The official description reads a “circular 2-stage cement rendered tower with conical slate roof”. The water came from a reservoir high up on the Fochabers Burn, at a point higher than the Garmouth tower. 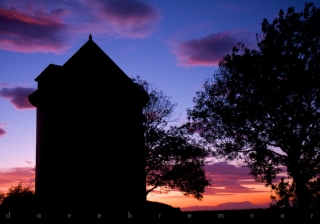 The water flowed by gravitation through a 4-inch pipe under the Fochabers road bridge, and on to the Garmouth tower, to fill two cisterns, upper and lower, within the body of the tower. Inside the tower there were pipes to fill and empty the cisterns, and others leading out of the tower to supply the surrounding district.

Gravitation schemes were generally used in hilly districts, and the reservoir was usually a tank, often sunk into the ground, from which water was supplied directly to the settlement where it was needed Most of the hill-tanks have gone, but at Fochabers the reservoir built for castle and village has remained, as have remnants of the Garmouth supply tank. Most water towers were designed for pumped water systems, often with the cisterns, or tanks, at the top of the tower. Water towers supplied by gravitation were less common.

Public Health Acts in the late 19th century required local authorities to provide clean water to all communities, which at that time meant small-scale local systems. In rural areas Special Water Supply Committees were set up to identify sources of clean water, have the water analysed, examine feasibility, ensure access, and once installed, manage both the water distribution scheme and the finances.

The Garmouth, Kingston and District Special Water Committee were established in 1895, but there are references in the Minutes of committee meetings to work on earlier possible schemes which had not proved feasible. There were several years of trial searches before the contract for the Fochabers gravitation system was finally agreed.

A promising plan to bring water from Wellshead near Tynet had to be abandoned because the Great North of Scotland Railway Company would not agree reasonable terms to bring water across the Spey using the viaduct. Local sources had proved unsuitable, until it was decided to dig a number of pits, and a good supply of potable water was found. The committee favoured a wind- powered motor pump system using this water, which would be less expensive than the Fochabers gravitation scheme. The County Engineer from Inverness was called in to asses both schemes, and he judged the Fochabers proposal as most efficient of the two schemes.

The Duke of Richmond and Gordon supported the proposed gravitation system, agreed to the plans, and contributed £500 towards the costs of the project. There had been many delays; the people of both villages were still using water from burns and wells, some of which were probably polluted, causing illness which affected local prosperity. This fact was pointed out by the G. and K Committee to both the Duke and the local authority.

The contract for the whole scheme was awarded to J. Hunter Clark, Plumbers, of Elgin and others.

The tower was built by a Mr. Ogilvy; when filled with water a number of leaks were found in the upper cistern.

In December 1900 or January 1901 a Mr Davidson was called in to seal the leaks.
He “picked the whole coating of the upper cistern and re-coated it with pure cement, after which the tower was water-tight.”

The water system needed regular maintenance.
A Water Manager was appointed to organise cleaning and repairs in the G. and K. area and also work at the Fochabers reservoir when needed.

A resident of Garmouth today remembers cleaning pipes inside the tower; entrance was through the ground-level door to pipes in the lower chamber and to the lower cistern; or through the top door to the floor above the upper cistern.

He also remembers the street wells, each of which had a lid and pump. There are 18 street wells marked on a map of 1898, installed for householders not yet connected to the main supply pipe.

As more residents applied for connections, the wells were progressively closed. 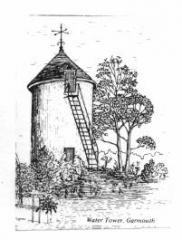 These Minutes of the Water Supply Committee end in 1930. The Chairman commended the work of all committee members for more than thirty years, which he was sure had been greatly appreciated by Ratepayers and all interested in public work. Mr. Murdoch was thanked for his services as Clerk since the inception of the committee, and also for his work as Water Manager for many years. After 1930 the town councils and County Council took responsibility for water supply management, eventually combining in 1950 to form the Laich of Moray Water Board.

It is believed that the tower continued to supply water to Garmouth and Kingston until the 1960s or 70s.

N.B. The Minutes of the G. and K. Water Committee were saved by an employee of the Elgin Water Board when their old records were being thrown away. He had the foresight to take the Minutes book to the Forres Archives Department, where they have since been stored.