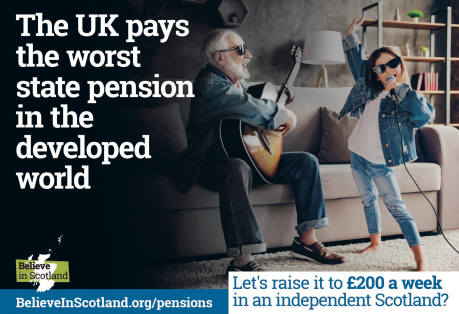 The Times, a deeply Conservative and Unionist newspaper has today launched an incompetent and completely self-defeating attack on the nonpartisan Believe in Scotland campaign, in a blatant attempt to provide political and legal cover for a plethora of fake unionist campaigning groups who have been accused of dark money funding.

Why is it “Incompetent and completely self-defeating”? Well, all the evidence required for any reader to understand that Believe in Scotland is 100% above board is contained in the article. The fact is, we discussed our 2021 campaign plans and the money we would spend, with the Electoral Commission, and they agreed that we did not have to register. That should have been the end of the article right there.  However, The Times, desperate to make a story out of nothing, sought a quote from the Electoral Reform Society (ERS) about dark money and the dangers it poses to democracy and added it into the section about Believe in Scotland as to make it look like the ERS was calling for an inquiry into Believe in Scotland dark money donations. We spoke to ERS, and they made it clear that is not the case saying that  “The quote from us doesn’t call for an inquiry” and that it was “Not targeted at Business for Scotland/Believe in Scotland but more a general call we make for improved transparency when it comes to campaign finance laws”.

The article headline is “Call for ‘dark money’ campaign inquiry” but who is calling for that? It’s not the ERS as the article tries to make the reader think. In fact, there seems to be no specific call for an inquiry. The headline seems to come from comments made by Jackie Baillie, Scottish Labour’s deputy leader who has a track record of making outrageous claims. In this case, she is clearly trying to deflect on behalf of unionist front groups facing dark money accusations – some of whom have links to the Labour party (you couldn’t make this up). In fact, BiS parent company, Business for Scotland, has called for such an inquiry, see our article – Electoral Commission: We’ll look into any claims of ‘dark money’ funding Unionist ads

We want to make it clear that the Believe in Scotland campaign believes wholeheartedly that dark money being funnelled to fake Unionist groups is an affront to democracy and we also call for an inquiry into such dark money groups – the Electoral Commission requires more powers to investigate the bank accounts of such unionist groups.

Dark money coming to BIS – don’t make us laugh – we are very open about where our campaign funding comes from and we are completely political party neutral, never campaigning for a specific outcome in any election.

Our funding comes from four key revenue streams and arrives mostly through micro-donations. See our successful 2021 fundraiser, it’s not a secret!

1) You can donate £5.00 a month or more to Believe in Scotland here

2) You can buy a copy of our best selling and game-changing book on Scotland’s economy, Scotland the Brief here

3) You can become a member of Believe in Scotland here

4) Our events calendar has been curtailed by lockdowns, but you can join the BIS mailing list here and we will let you know about forthcoming events.

The Times article was dishonest in four key ways

1) It splits the article in two placing the credible concerns about dark money funded unionist groups in a missable sidebar, whilst the non-credible attack on BiS is presented as the main thrust of the article.

2) It places the quote from the Electoral Reform Society in the BiS section in what seems like a deliberate attempt to mislead the reader into thinking the ERS is complaining about BiS when they have made it clear to us that they were not.

3) The article states that an anonymous campaigner had said our billboard campaign would have cost as much as £30,000 but when they contacted us, they were saying as much as £80,000 and they clearly backed off that ridiculous amount when we told them it was laughable – they are basically making it up as they go along.

4)  The Times will not say who made the claims about BiS or who supplied the estimates. The article was not researched by the journalist in question but seems to be based on evidence supplied by people with links to those accused of being fake unionist campaign fronts. When I asked him (by email) to tell me who was making these false accusations he wrote “I don’t discuss any sources for stories”.

We discussed our 2021 plans with the Electoral Commission, explained that we were not campaigning for any party standing in those elections and that our campaign was ongoing – and they agreed that we were not required to register.

We have never and will never accept funds from political parties, our neutrality is very important to us. All our funding comes from events revenues, publication sales, memberships, and donations.

There has been well-documented and justified criticism of potential “dark money” used by unionist campaign groups. They are indeed a threat to our democracy and seem very well funded, potentially from vested interests, whereas almost all our funding comes from monthly micro-donations from ordinary people who simply believe in Scotland.

Believe in Scotland has hundreds of thousands of followers but only a tiny fraction donate to us (£5.00 a month helps massively), we make every penny count and last year we distributed nearly two million items of physical campaign materials to the Scottish public to help them realise that independence is normal. You can see what we are up against – organised fake unionist fronts with questionable and massive funding – please donate now and level the playing field.

The post The Times embarrasses itself with cack-handed attack on Believe in Scotland  appeared first on Believe In Scotland.