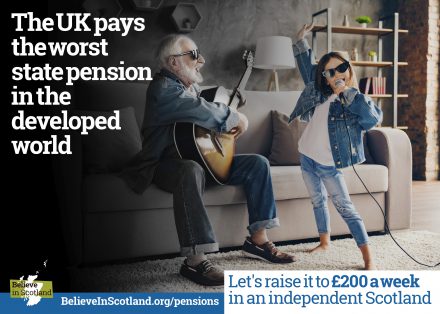 The UK state pension is not big enough to support the bare minimum standard of living for a single person, according to a new report. And it warns that a quarter of employees are not on track to be able to afford it.

The Retirement Living Standards report published by the Pensions and Lifetime Savings Association estimates that a single pensioner needs £10,900 annual income after tax to support what it defines as the minimum standard of living. That works out at around £209.60 a week. Last month Believe in Scotland had the economic consultancy firm Scotianomics work out the minimum living standard for a Scottish pensioner and we calculate that they would require a pension of at least £200.00 a week.  This new report from PLSA therefore backs up our findings.

The UK’s full basic state pension – the worst in the developed world according to the Organisation for Economic Co-operation and Development – is just £137.60 a week, or £7,155 a year.

The new UK state pension for men born after April 1951 and women born after April 1953 is £179.60, although you might receive less depending on your National Insurance record. The new full pension works out at £9,339 a year, still significantly less than the suggested minimum required but remember most pensionors don’t get that much.

The Retirement Living Standards estimates do not include housing costs as they assume pensioners will have paid off their mortgage.

The report states: ‘’About three quarters of single employees are likely to achieve the minimum standard.’’ That means around a quarter of new single pensioners will not be able to afford the bare minimum standard of living.

Gordon MacIntyre-Kemp, the director of Believe in Scotland, stated; “This report demonstrates what we have claimed before, that the UK basic state pension does not reach the level at which pensioners who were not able to afford private pensions can live with dignity in retirement. The UK is a wealthy nation and wealthy nations should not have pensioners living in poverty. However successive UK governments have deliberately kept the state pension low to force those than can afford it to purchase private pensions. This boosts the profits of the city of London at the expense of pensioners. This must stop and we will not allow it to be the case in an independent Scotland”.

A minimum lifestyle is based on the Joseph Rowntree Foundation’s Minimum Income Standard and covers all a pensioner’s needs and a little extra for ‘’social and cultural participation’’. It includes a week’s holiday in the UK, eating out about once a month and some affordable leisure activities about twice a week. It does not include a budget to run a car.

The annual budget for the ‘’minimum’’ standard has risen since 2019 by £700 to £10,900 for a single person and by £1,000 to £16,700 for a couple in 2021. The report suggests only those single employees with workplace pension schemes have even a chance of affording the minimum standard of living.

The ‘’moderate’’ retirement living standard includes a two-week holiday in Europe and eating out a few times a month. The annual budget for the moderate standard has risen since 2019 by £600 to £20,800 for a single person and by £1,500 to £30,600 for a couple. The eating out budget, which rose from £75 per person per month to £100 per person per month, drove much of the increase for the moderate standard.

Pensions and Lifetime Savings Association analysis suggest only half the number of single employees are on track to expect a lifestyle between minimum and moderate.

Only about one in six single employees are projected to have an income between moderate and comfortable.

Organisation for Economic Co-operation and Development figures in 2018 showed the UK paid out just 29% of average earnings on pensions, the lowest of any developed country. Top of the table were the Netherlands, which pays 100.6% of average earnings, Portugal at 94% and Italy at 93.2%.

Believe in Scotland recently launched a billboard campaign urging a state pension of £200 a week in an independent Scotland.

That campaign was last week attacked by the former Better Together head of strategist in the first independence referendum campaign Blair McDougall. He tweeted: “What I don’t understand is why only promise £200 a week? Why not £300? £1000? If you’re going to bullsh*t at least put your back into it.”

The Believe in Scotland campaign was for a pension slightly lower than the bare minimum now estimated as necessary for a single person by the Pensions and Lifetime Savings Association.

Blair McDougall has been left with a red face for suggesting the UK cannot afford to pay a pension capable of supporting the most basis standard of living for a single person. In fact he thinks that even the suggestion that the UK CAN afford it is laughable.

If that really is the case then the future of the UK is more perilous than we thought and independence offers Scotland’s pensioners the only hope of a decent life.

The post Revealed: UK’s paltry pension can’t provide even the most basic standard of living appeared first on Believe In Scotland.