Yeah. I know. This is the sort of thing that normally happens to Selena Gomez. The author of the world’s unlikeliest internet article is someone called Katy Montgomerie, who – entirely uncoincidentally – also appeared to be the instigator of the Twitter pile-on that led to me suffering 24 hours of sustained abuse and harassment on Tuesday and yesterday (at least two people were suspended from Twitter as a result).  I know very little about her other than that she has just over 50,000 followers on Twitter and is a keen participant in the ongoing trans debate.  Her Medium profile identifies her as a trans woman herself, and she appears to be based somewhere Daan Saaf, judging both from her accent on her YouTube videos and the hesitant way she refers to the Scottish political scene as if the words she’s using are unfamiliar and foreign.

Poll: Vast Majority Of Public Believe It Is Wrong For James Kelly To Pressure People To Date Himhttps://t.co/GbQCajIpus

Basically Katy was livid about the wording of one of the questions in the Scot Goes Pop / Panelbase poll on GRA reform and related gender matters, claiming that it portrayed trans women as sexual predators.  She’s wrong about that, but judge for yourself…

It’s difficult to get into an in-depth discussion about the reasons for choosing a certain wording when you’re faced with a 280-character limit on Twitter, and especially when the people you’re speaking to are not engaging in good faith.  However, the point they’re missing (almost certainly intentionally) is that the reference in the poll question to people being pressurised is not some gratuitous add-on extra, it’s actually the logical, utterly inescapable flip-side of the suggestion that it is bigoted or transphobic to refuse to consider dating trans women (for the avoidance of doubt, that was a suggestion that several of Katy’s fan club explicitly made during the pile-on).   Telling someone they’re transphobic, which in the current climate carries similar gravity to allegations of anti-Semitism, is a very dramatic thing to say, and self-evidently constitutes very considerable pressure for that individual to change their position and to consider dating trans women in the future.  If you want to say that nobody is under any pressure to date trans women, that’s fine, but in order to make that claim with any credibility, you first have to remove the pressure that is in itself being caused by the unambiguous statements that some people’s sexual orientations are “transphobic”.  You really can’t have it both ways.

A common refrain during the pile-on was that I had been “transphobic” myself by singling out trans women in the poll wording – “why not ask whether it’s wrong for fat people or Asian women or whoever to pressurise people into dating them?”  And the answer to that is straightforward – it’s because there is simply no equivalent to the allegation of transphobia that would apply to other types of sexual preferences. Women don’t usually accuse gay men of misogyny for refusing to date them, and men don’t usually accuse lesbians of misandry for refusing to date them.  (I say “usually” because some do, but the point is that nobody takes them remotely seriously when they do it.)  If Asian women occasionally feel that men refuse to date them because of racism, that’s a very different sort of issue, because – and I can speak with some authority here – Asian women are just as attractive to heterosexual men as any other women.  If racism does sometimes get in the way, there will always be any number of other men out there who will be interested.  There’s no natural barrier that requires people’s entire sexual orientation to be reinvented or restructured.

Heterosexual men and lesbian women are, at least in certain circumstances, attracted to women of all ethnicities and of all body shapes and sizes.  In most cases, however, they are not attracted to people who are physically or biologically male.  That’s a feature, not a bug – it’s at the very core of heterosexual male / gay female sexual orientation.  The discriminating factor in that orientation is not personal identity or ‘spirit’ – as a heterosexual male I might very well be attracted to a woman with a ‘masculine spirit’ but I wouldn’t be attracted to a man with a ‘feminine spirit’. Label that as transphobia if you want to, but it’s just who I am and how I was born. In the same way, lesbian women are who they are. Telling lesbians that they must consider dating trans women is in many cases tantamount to telling them they must renounce their sexual orientation – and if you also say they’ll be branded as bigots if they don’t do that, then yes, that undoubtedly constitutes pressure.

A possible alternative version of the poll question, which might have attracted less ire from the Katy Montgomerie Fan Club, would have been “is it bigoted or transphobic to refuse to consider dating trans women?” with simple “yes” or “no” answers.  But that would have been a cop-out, because it quite simply wouldn’t have been a balanced question.  There are two very robust stances taken by each side of this debate – one side says “you won’t consider dating trans women and that makes you transphobic bigots” while the other side says “you’re calling us transphobic bigots and that’s putting intense and unreasonable pressure on us to widen our dating pool to include people we’ll never actually be attracted to”.  The softer question would have offered respondents the opportunity to give direct backing to the robust stance taken by one side of the debate, but not to the equally robust stance taken by the other side.  Essentially what we’re being told is that only one half of the debate can be referred to in poll questions – well, that type of censorship and self-censorship might be the way we’re headed, but don’t try to tell me it’s the way to poll public opinion fairly and accurately.

Katy’s Medium article is about a joke Twitter poll she ran on Tuesday, asking “is it wrong for James Kelly to pressure people into dating him?”  She imagined this would goad me into “admitting” that her question portrayed me as a predator, and therefore by extension that my own poll question had done the same to trans women.  To her dismay, though, I was far more concerned about her cavalier approach to polling methodology.  She announced that if her self-selecting poll exceeded 1000 votes, it would be just as “representative” as mine – whereas of course it would still have been infinitely less representative than a properly-conducted poll even if it had hit 100,000 votes.  Some of the usual suspect “trendies” from Scottish political Twitter then thought they could rescue her by dipping into the lengthy dossier they keep on me, and produced a screenshot to support their claim that I “had changed my tune about the validity of self-selecting Twitter polls” .  I warned Katy that she wouldn’t exactly be dispelling the impression that she’s clueless about polling if she placed too much reliance on that – but, alas, that warning has gone unheeded.

Unfortunately for her, I was making a very different point in the screenshotted tweet – which was about the absolute numbers who said they were planning to vote Alba in the Holyrood election.  Although Twitter polls are self-selecting, they nevertheless restrict people to one vote per account. As we knew that roughly 100,000 votes would probably be enough to win Alba list seats, the fact that Alba could attract, say, 1000 votes in a Twitter poll did tell us something interesting – it suggested they had at least 1% of the necessary total and that there were probably more votes out there.  (In the event, Alba took around 45,000 votes and thus fell short.)  That perfectly valid point bears no resemblance whatever to suggestions that the percentage results in self-selecting polls are in any way meaningful or reliable.  They are not.  Never have been, never will be.

As for the question wording, the equivalence that Katy was inferring simply wasn’t there.  It would only have been there if I had ever claimed that “people who refuse to consider dating James Kelly are Kelly-phobic, and are therefore required to change their attitude immediately”.

“Kelly said that he spent “thousands of pounds” on this poll.”

Yes, Kelly did say that.  And you’ll find, Katy, that properly-conducted, full-scale polls do tend to cost thousands of pounds. But it was probably a sensible precaution to put that bit in inverted commas – I mean, it might turn out that they only cost 40p or something.  Who knows.
“If it’s not f****** obvious there is absolutely no evidence that James Kelly is pressuring people to date him, just like there is no evidence at all that there is an issue with trans people pressuring people to date them. The original question he asked was a classic example of a “have you stopped hitting your wife?” question based around one of the most popular anti-trans propaganda topics at the moment. My poll and the part of this article about him is satire of his.”
Katy goes all serious and angry in her final paragraph.  Just a thought, but I can’t help feeling that if you need to specify “this is a satire” in your very last sentence, it might just possibly betray a slight concern that your satire has spectacularly failed.
UPDATE: Due to her special interest in the subject, the individual formerly known as “The Random Totty From Freedom Square” has been contacted for comment on the shock revelation that a Medium article has been published about my dateability.  While we’re waiting, here are her suggested “improvements” to the photo I used in the Scot Goes Pop poll fundraiser… 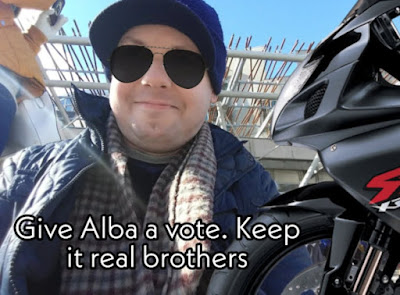 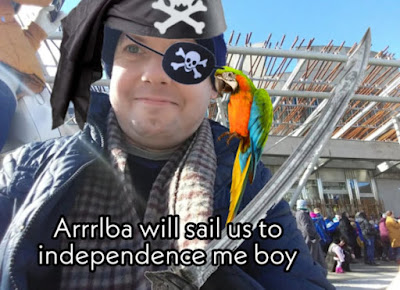 *  *  *
Via the embedded player below, you can watch my discussion last week with Denise Findlay about the issues raised by the Scot Goes Pop GRA poll.