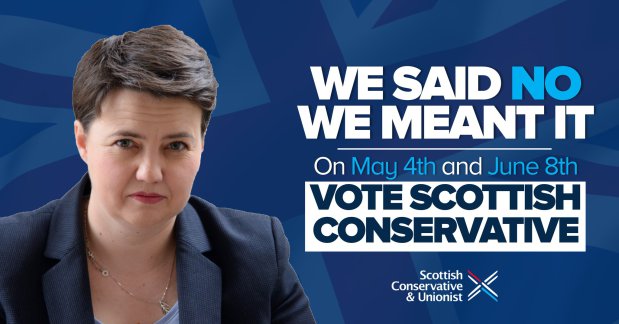 Only a vote for the Scottish Conservatives will send a strong message that we oppose SNP’s divisive plan for a second referendum. pic.twitter.com/XUmDdg7VXZ

The Tories made opposition to a second independence referendum the central issue of their campaign. They explicitly asked the Scottish electorate to come out and vote against it. This is, of course, not really a local election issue so their failure to reduce the pro-referendum SNP vote means they lost the election on that issue. From the SNP website:

In response to the Tory call for a vote against Indyref2, those who were already in agreement merely switched their vote to the Tories. While the mainstream media are making much of their 164 seats gained, these came from Labour who lost 112 and the Independents who lost 86.

So, on their own chosen ground, the Tories lost. The idea that they have in any way damaged the referendum bid is plain daft. As for the Labour voters who stuck to their leftist principles, who knows how close they are to becoming Yes voters next time?