You want to know the price of the Union? Following the news that the infamous Glasgow Effect is a by-product of decades of Westminster inspired social engineering, a study carried out by Sheffield Hallam University has found that by 2020 Scotland is going to suffer from £1.1 billion worth of cuts to the social security payments received by its already battered residents.

Across the UK people who rely on state support in order to eke out a living are facing a total of £13 billion in cuts. Under the Tory-Lib Dem coalition, Westminster slashed £5 billion from the funds spent on housing benefit, under this government that figure is set to double. We have to do this to balance the books, says George Osborne, because the global financial crisis was caused by poor people and by the homeless. Meanwhile the incomes of the richest continue to soar because it’s unfair that a company director can’t afford a third or fourth holiday home. This is because of the fundamental Tory law of economics that says that in order to be encouraged to be more productive the poor must be whipped, but the rich must be cossetted. That’s ukonomics that is.

The areas worst affected by the new round of cuts will be the same areas which were assailed by the deindustrialisation which Thatcher employed as a deliberate strategy to castrate the Unions. In other words, after creating cities and town full of people suffering from ill health, disabilities, shortened life expectancies and curtailed life choices in an effort to destroy organised woring class resistance to their rule, the Tories are now punishing the poor and the marginalised even further by cutting the pittance it pays to keep them in misery.

Don’t expect Ruth Davidson of the Ruth Davidson Holding the SNP to Account Vote Ruth Davidson Party to do any holding to account while any of this is going on. All Ruth is concerned about is a second independence referendum that’s not on the horizon. Besides, it’s her pals in the Tory party who are punishing the poor. Ruthie’s so relaxed about that that she’ll go and pose for a photo-op while sitting on a buffalo that’s driving a tank.

This is Scotland remember, and it’s only the SNP who need to be held to account, not the people who have their paws on the levers of marco-ukonomic control and who have dug their claws into the backs of the poor, the low paid, and the vulnerable. People who can barely take ten steps but who have now been assessed as fit for work thanks to the DWP’s changes to disability assessments aren’t able to make it to Ruthie’s photo ops. People are being forced to food banks, into desperation and despair, but as long as the Tories can pose for a nice photie and hold the SNP to account for Gaelic road signs, the press cameras can forget about the devastation that Ruth’s friends wreak on our society.

The cuts are UK wide of course, people in Liverpool and Manchester and Newcastle and Swansea are going to suffer too. That must be that pooling and sharing that Gordie Broon told us about. Doesn’t that make you feel great to be British? This is a country where solidarity means that we all get our throats slashed together. But not quite all together. Funnily enough the cuts are not going to be felt in the south and east, the regions of the UK where people are most likely to return a Tory MP. No doubt this is entirely coincidental. Places like Scotland and Wales and the urban areas of the North of England where people are less likely to vote Tory are going to bear the brunt of the cuts, and Glasgow is one of the 40 districts worst affected. This is of course a mere accidental by product of Treasury calculations. And if you believe that you probably also believe that Ruth Davidson posing on a tank for fan boys in the Tory press is actually a well articulated policy position.

Ukonomics means the property bubble of London, the yawning chasm between rich and poor, it means emigration from Scotland is presented as a Union benefit while benefits for the disabled, the elderly and the chronically ill are slashed to the bare bones of a starvation income. It means newspaper features about lifestyles where the well off and well connected pay outrageous sums for the latest superfood berry, handpicked by Peruvian grandmothers in a cloud forest in the Andes, while the poorest worry if they can afford a tin of beans in an E-numbers sauce and the self righteous tell us that things are so much worse in Chad or Syria so we must not complain. But we don’t live in the third world, we don’t live in a war zone. We live in what we’re always being told is one of the richest and most successful countries in the world. So why is it still crap?

The new Scottish Parliament gets underway properly this week, a parliament which can look forward to some limited powers over social security. The powers come as part of the deal which was grudgingly granted to Scotland by Unionist parties who were determined to deliver as little as possible of the frantic promises that they made during the last few days of the independence referendum campaign. The SNP has promised to use the new powers to restore housing benefit to young people, increase carer’s allowance, and improve the way in which disability benefits are assessed. But any increased payments made in order to ameliorate the cuts that are being enforced by Westminster will only have to come out of some other part of the Scottish budget.

The new powers don’t prevent Westminster from lopping off a Scottish limb, they just give the Scottish government the choice of which limb is to be amputated. And now the Scottish Unionist media can concentrate its fire on criticising the Scottish government for its choice of limb, while ignoring the people who are demanding the amputations in the first place. The Scottish parliament doesn’t have control over the powers required in order to stimulate the Scottish economy and create jobs and growth which could prevent the need for any cuts in the first place. We’re still tied to a Tory agenda, we’re still slaves to ukonomics. 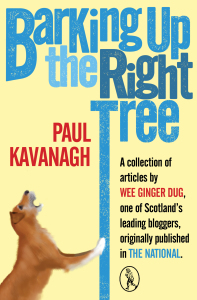 BARKING UP THE RIGHT TREE Barking Up the Right Tree has now been published and is an anthology of my articles for The National newspaper. You can submit an advance order for the book on the Vagabond Voices website at http://vagabondvoices.co.uk/?page_id=1993

The two volumes of the Collected Yaps are in stock again. See below for order details.

Donate to the Dug This blog relies on your support and donations to keep going – I need to make a living, and have bills to pay. Clicking the donate button will allow you to make a payment directly to my Paypal account. You do not need a Paypal account yourself to make a donation. You can donate as little, or as much, as you want. Many thanks.

Order the Collected Yaps of the Wee Ginger Dug Vols 1 & 2 for only £21.90 for both volumes. A limited number of signed copies is still available, so get your order in now! P&P will be extra, approximately £3 per single volume or £4 for both sent together. If you only want to order one volume, please specify which. Single volumes are available for £10.95 per copy.

To order please send an email with WEE GINGER BOOK ORDER in the subject field to weegingerbook@yahoo.com giving your name, postal address, and email address and which volumes (1, 2 or both) you wish to order. I will contact you with details of how to make payment. Payment can be made by Paypal, or by cheque or bank transfer.