Labour Party members really hate that independence supporters and Tories alike have started referring to their party as “Liebour,” but what choice are we given when Labour does nothing but lie and try to deceive people? Now they are all “independents.”

Scottish Labour is planning on taking the councils by stealth, with Labour members all over the country standing in the local elections as “independents.” Of course there are Tories doing the same thing, but it is the Scottish branch of the British Labour Party that stands to lose the most on 4 May. “Vote to you boak,” as a tactical voting strategy, promises – with voters on both sides of the national debate prepared to saw their hands off with a rusty blade rather than vote Labour – to finally complete the destruction of Labour in Scotland. 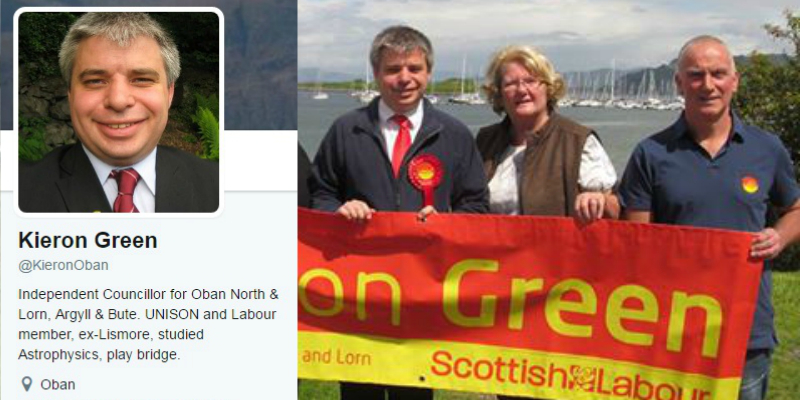 Do you know where your “independent” has been?

Yet it would appear that Kezia Dugdale is not willing to give up the ghost just yet. From one side of the country to the other candidates who were previously elected as Labour councillors and others with long-standing links to Labour are standing for election as independents, clearly hoping the voters will give an independent a transfer vote before Labour. We caught up with Kieron Green, elected as a Labour councillor for Oban North and Lorn but who is now standing for re-election as an independent. He, like so many others, has correctly seen that the writing is on the wall and so – to safeguard his political career and help a Labour Trojan Horse in through the backdoor – has donned the invisibility cloak of an independent candidate. He is anything but independent.

On his Twitter profile he states that he is a “UNISON and Labour member,” and when asked why he was pretending not to represent Labour at council level he replied: “Voters can see that information on my profile.” Sure, Kieron, the voters of Oban North and Lorn are all watching your Twitter account. The reality is that he has 126 followers, and already the number of retweets outing him has dwarfed his popularity on social media. Most of Oban’s 2,630-plus registered voters will not go looking into the political history of everyone on the ballot paper, and this is what Kieron Green and the Scottish Labour Party are now banking on – hoodwinking the people of Scotland again.

What they are doing is not illegal – this is how the powerful have always written the rules to protect their hold on power. It isn’t even against the rules of the Labour Party, so long as an “independent” Labour Party member isn’t standing against an honest Labour Party candidate. Regardless of its legality or who is doing it, the people of Scotland deserve much better than this. All of this is dishonest and duplicitous – lacking in anything like transparency. Democracy – even local democracy – works best for everyone only when the decision being made is an informed decision. Each of us now has a responsibility to let others know what is going on and to do our homework on every single candidate on the ballot.

Can We Remain In The EU? YES We Can!